In November 2018, Marguerite and Nicolas, General Secretary and Maskbook Project Manager, traveled to Ghana for a series of Maskbook workshops in collaboration with local environmental organizations: Recycle Up Ghana and Plastic Punch.

Why Ghana? Located between Togo, the Ivory Coast and Burkina Faso in the Horn of Africa, this country is experiencing great economic growth and has gain a reputation internationally for its political stability. Ghana is far from being spared from environmental crisis, however; it is one of the ten most polluted countries in the world. Plastic pollution, exacerbated by the absence of a local recycling channel, is one reason; air pollution, compounded by waste being burned in open dumps, is another. Therefore the Maskbook team went for a second time to Sub-Saharan Africa for a series of creative workshops. 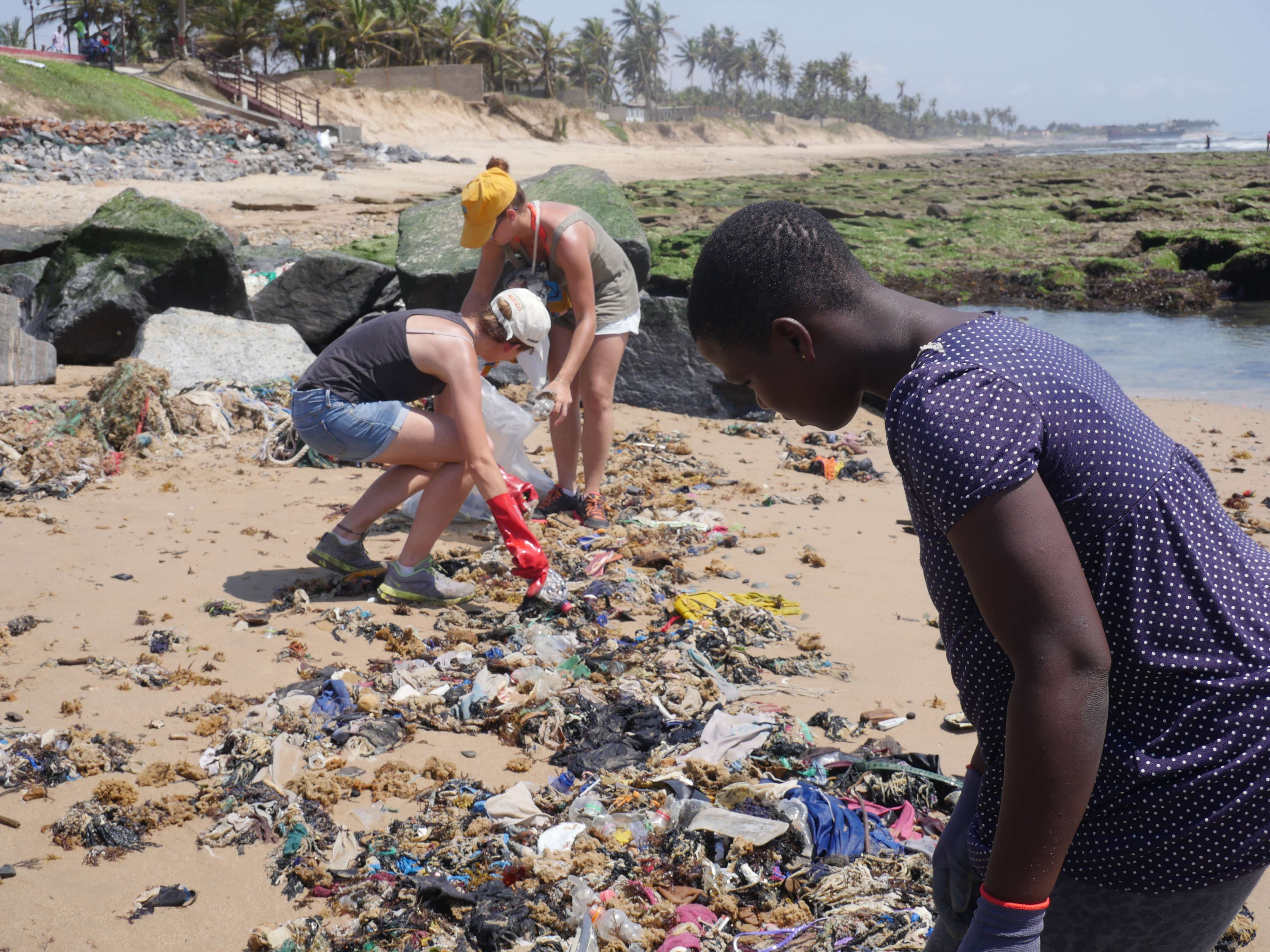 Upon arrival in Accra, the capital, the team worked to collect local waste and ingredients that would enhance the masks at the coming workshop. On the way to the local market, the team quickly realized that the majority of the waste was just plastic water packets littering the ground. Other scraps that would ordinarily be found in Western countries are almost all reused or difficult to find. After two hours of strolling in the market, the team met some tailors, who graciously offered fabrics and wax, materials ideal for workshops. At that point some packaging and plastic bottles had been harvested, but there wouldn’t have been enough to provide the next day's workshop.

Several people the team met on the beach of Accra were deeply affected by plastic pollution. There is a great miscellany of small plastic waste: corks, plastic shoes, toothbrushes, packaging, small toys etc. The bags were soon filled up thanks to the help of young Ghanaians who joined the team; which proved to be an opportunity to talk to them about the project, and invite them to join the workshops.

The next day was the first workshop at the Madolly School in North Accra. The school is part of the RecycleUp Ghana network, which has been working since 2009 on educating young people about environmental awareness. They’ve developed awareness programs in a school network in Accra and Kumasi, and organized summer camps. The Maskbook workshop was a success with more than 80 young participants taking part in a fun and convivial atmosphere. A correspondent of the German broadcaster Deutsche Welle was present to film the day’s events. 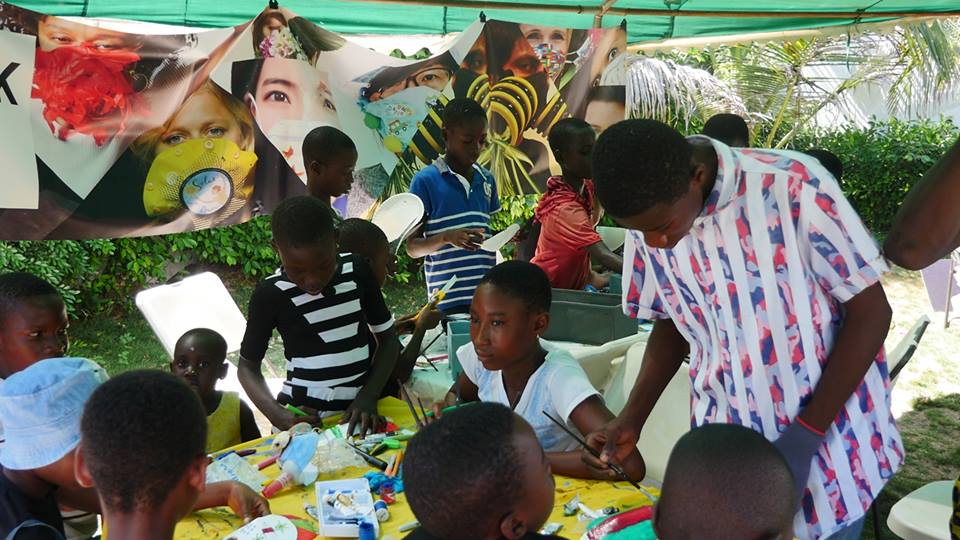 The day came to an end with the team already preparing for the second workshop the following day with Plastic Punch, another local organization that arranges cleaning days at New Ningo beach, just a few kilometers from the capital. On Saturday morning at 8am, the meeting point was at the front of the Alliance Française for the departure by bus to New Ningo. Many volunteers answered the call.

Plastic Punch is a non-profit organization, bringing together an international team of environmentalists who want to take action against plastic pollution. Founded by Legacy, a former sailor and journalist, the association organizes the cleaning of beaches, which are also nesting grounds for turtles, fortnightly. The association is also developing strong partnerships with local upcyclers, and would also like to develop their own recycling sector in the future.

New Ningo is a beautiful beach ravaged by plastic waste. A hundred children from the nearby town joined us to pick up the garbage, during a day when everyone was in high spirits. Some joined the Maskbook workshop, which was located on the beach next to a workshop organized by a local upcycler artist. It was very hot, but was also a day when everyone was happy, punctuated by songs from the megaphone Legacy, channeling the excitement of overflowing children.

The clearing day ended at 3pm. Dump trucks arrived to collect the many bags of debris. There was still a lot of garbage mixed with seaweed, but much of the work was done. A few days later, a new wave of waste will wash up on the shore, but these campaigns are mainly aimed at awakening the consciousness of the participants. Back in Accra, the teams of Art of Change 21 and Plastic Punch discussed at length the possibilities of partnerships and the continuation of the workshops. An exhibition is planned at the French Alliance in Accra.

On Sunday, December 11th, the team headed to Abetifi, a small town a few hours from Accra. Two "trot trots" (or small shared buses) were used to reach the village where the reception was provided by Lydia, a teacher of the school. The region was very "green", with abundant vegetation. We went to bed very early (around seven o’clock) and woke up with the rising sun and the cockerel (around 5:30am). 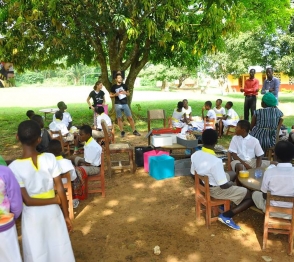 The next day's workshop took place outdoors, under the trees, with students ranging from 12 to 16 years old. They collected some waste upstream, but we came to a complete standstill as the harvest was so poor.

The young people were very receptive, despite the fact they don’t live in a polluted environment like Accra.

They were aware of their own good luck, living in an environment where nature is abundant and unspoiled. The principal of the school thanked us warmly, and we promised to send some games and books for the French teacher. This school has just joined Recycle Up Ghana. After two workshops of 40 people, we left for Accra to do the last workshop at the Sunflower School.

The day before the last workshop, the team met the very popular Ghanaian artist, Serge Attukwei Clottey. He worked with yellow jerrycans, assembled to create drapes that cover buildings and paths. He is very involved in the local communities he works with, integrating them into the creative process. Clottey is one of many Ghanaian artists working with recycled materials. He grew up in Labadi, a nearby city of Accra on the coast. The next day, the team met Naw Tei, another local artist, who created masks and bas-reliefs from pieces of assembled metal.

The next day was the last Maskbook workshop, in a private school where students are already educated about environmental issues. Here, Recycle Up had installed large baskets to collect bottles and packets of water, encouraging eco-friendly gestures. For the Maskbook workshop, the teachers were mobilized, and the children organized themselves into duos in order to create their masks. The results were superb, and the partnership with Recycle Up is a success. 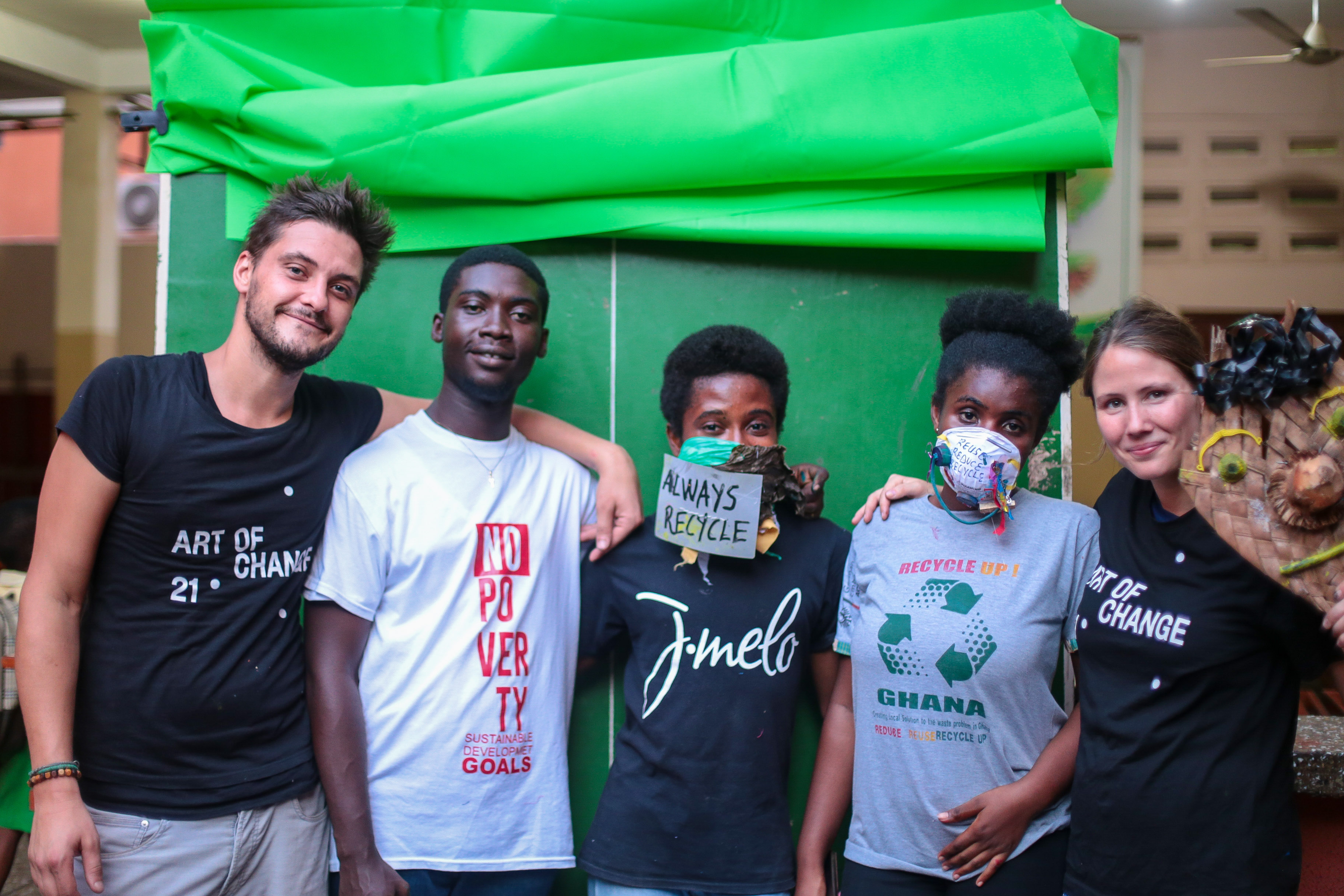 On the last day, the team visited Jamestown, a historic area famous for its milking during the 18th and 19th centuries. The old colonial houses adjoined a white prison, a former prison for slaves. On the front of the Jamestown café there’s a fresco depicting a man wearing an anti-pollution mask, and an exhibition of masks made from recycled objects inside is a testament to the artistic effect the Maskbook project has had on the country. The team are invited by the Norwegian Embassy for an evening devoted to plastic pollution. Many campaigners, NGOs and artists are present to share tips on fighting the good fight.

The Paris Agreement is a legally binding international treaty on climate change. It was adopted by 196 Part...

Last December, a new zoonosis called COVID-19 suddenly appeared and shook the world like no other pathogen ...

Since 2015, Maskbook has been taking creative action on the link between health and the environment, using ...

Maskbook visited Madrid for the 25th United Nations Climate Change Conference (COP25) at the end of 2019. I...